Michael and I were fortunate to be able to take a trip to France in May and one of the things we did was to explore how alternative medicine is used there. I’d like to share some of our impressions with our Eastwind friends.

First, France is a marvelous country with a culture that could teach many of us in the U.S. a great deal about handling some of our health issues.

The first thing we noticed in Paris is that in spite of it being a huge city (approximately 12 million people), it is much quieter than a huge American city. In 9 days in Paris we literally never heard a loud radio, or loud music, or even other loud noises, coming from cars or apartments. Parisians are very aware of each other and of containing themselves in a way that Americans have never considered. Perhaps this comes from living in such close quarters with each other but it is certainly part of their culture to realize that they are responsible to each other for the type of environment that exists.

Along this same line, we learned that in French hospitals, quiet is stressed as necessary for healing – quiet and rest are prescribed for every patient. Additionally, homeopathic therapies are widely used by both allopathic physicians and alternative medicine practitioners. It is not at all unusual for a hospitalized patient to receive some type of homeopathic remedy along with more Westernized approaches to healing.

Homeopathy is popular not only among the French public but also among the French medical community. As many as 70 percent of physicians are receptive to homeopathy and consider it effective, and at least 25,000 physicians prescribe homeopathic medicines for their patients. Homeopathy is taught in at least seven medical schools, and there are numerous postgraduate training programs. Courses in homeopathy are taught in most of France’s schools of pharmacy, and also taught in some dental schools, veterinary schools, and three schools of midwifery.

Another interesting facet of the French healthcare system is that, in general, if you’re not feeling well, or you have some symptom you wish to have treated, your first stop is your local pharmacy. Pharmacists are trained in first aid, in homeopathy, and in nutrition, as well as in the use of prescription medication. If the pharmacist thinks you need to see a medical doctor, you are referred to a doctor from your pharmacist. 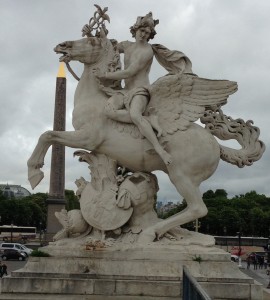 I stopped in a pharmacy in Cassis in order to learn about their system and to see what would be recommended for my chronically dry left eye. The pharmacist looked at me closely, asked me some questions about symptoms and nutrition, and recommended a homeopathic remedy called Optique. He also said that I could try some Bausch and Lomb eye drops that were literally 1/10th the cost of what they are here in the U.S., but since I had tried them before and not found relief, he recommended eye drops that are made of hyaluronic acid at a particular level of concentration.

Now I’ve been taking liquid hyaluronic acid orally for some time for my joints and have found it to be a miracle (no kidding). Hyaluronic acid is a natural substance found throughout the body that is concentrated in joint capsules, skin, and eyes and I credit it with saving my knees and my chronically dry skin. We sell this type of hyaluronic acid which is called Synthovial Seven.  As wonderful as it is, the oral form has not been helpful for my eyes.

I walked out of the pharmacy with the Optique and the hyaluronic acid eye drops in hand, and of course, I tried them immediately. Within minutes, my eye that had been scratchy and red and tearing uncontrollably became soothed. The tears stopped and the redness and itching disappeared. Wow!

Interestingly, though Optique can be purchased in the U.S., these magical hyaluronic acid eye drops are not available in our country. A completely natural substance that is available all over Europe, that has been shown to be beneficial for large numbers of people with dry eyes, is not available here. Hmm. As the French would say, “quel domage” (what a pity!).

Of course I went back to the pharmacy the next day and bought as many bottles of eye drops as I could, and I’m hoping to find them in U.S. stores soon! This is just one of the many differences in healthcare philosophy that we encountered in France. Stay tuned for more . . .